How to increase the strength of copper-based alloys

There are multiple processes to increase the strength of copper. However, most of them cause a severe decrease of its conductivity – but not all of them. Read about a method that increases strength and keeps a high conductivity.

Copper has many great and useful properties – one of which is its conductivity. Copper, and therefore all of its alloys too, are highly capable of conducting electricity as well as heat, which makes them an extremely useful material in nearly any industry. However, the conductivity of a material is in direct contrast to its strength. It is therefore not possible for any kind of material to have high strength and high conductivity at the same time. But there are ways to improve the strength while maintaining high conductivity.

The strength of a material describes its ability to withstand mechanical stress before failure – such as unintentional bending or breaking – occurs. The strength indicates the maximum stress that a material can withstand during its deformation. Typically, alloys achieve higher strength than pure metals. Materials with high strength are particularly suitable for lightweight construction but are generally difficult to machine.

There are two different conductivities to be distinguished: thermal and electrical conductivity. Thermal conductivity describes the ability of a material to transport thermal energy by means of heat conduction. The temperature always flows from the hottest to the coldest source until thermal equilibrium occurs. Materials with high thermal conductivity are, for example, in demand for heat sinks that can dissipate heat well, while thermal insulation materials, on the other hand, should tend to have lower values.

How to increase the strength of a material?

There are multiple ways of increasing the strength of any material, but each method has its pitfalls. But let’s take a closer look at some possibilities:

In order to improve certain characteristics of a metal, small amounts of alloying elements are often added. Common alloying elements for copper are nickel, aluminum, tin, or manganese, among others. Take note, that the addition of a substance to improve one specific property often has unintended effects on other properties. For example, Phosphorus is often used to deoxidize copper, which can increase the strength and hardness, but severely affects the conductivity. In general, alloying elements increase the strength of copper but also decrease conductivity. 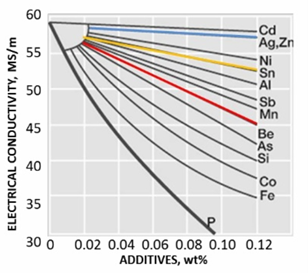 Grain refinement is a great way to increase strength, as it increases the number of interfaces between two grains. This prevents the movement of dislocations and causes hardening. However, as grain boundaries are 2D defects in the crystal structure, they tend to decrease both electrical and thermal conductivity.

Increase the strength while maintaining conductivity

The higher the strength, the lower the conductivity, right? Generally, this is true. Yet, there are exceptions. Dispersion strengthening or precipitation can be used to achieve specific improvements in the properties of a metal or an alloy. This is achieved by introducing material particles that are largely insoluble in the metallic matrix, which means that the alloying elements added for strengthening are tied-up and precipitate particles leaving very little in the copper matrix. 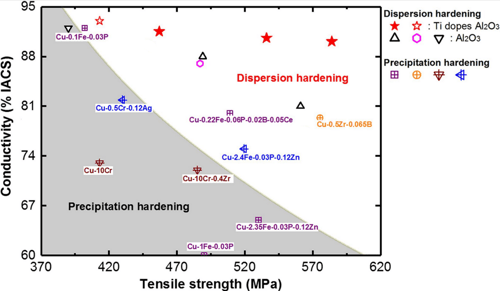 Therefore, precipitation hardening has proven to be the most adequate way to achieve the optimum combination of strength and conductivity in copper-based alloys. For example, AMPCOLOY® 940 and AMPCOLOY® 972.

You want to know more about the metallurgy of copper and copper-based alloys? Download now a free extract of our book «Metallurgy of Copper and Copper Alloys» 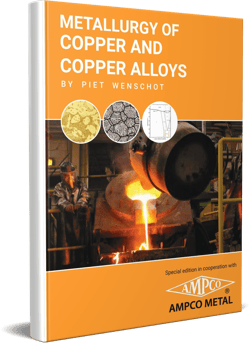